Skip to content
Offense Offensive Line Run Game Spread
April 5, 2013April 3, 2016 Brett Dudley 0 Comments
For most Spread teams Inside Zone is the bread and butter of their run game.  It is one scheme that can be installed and run vs any front.  It is a safe play that you can count on to eat up yardage consistently and then BOOM RB squirts up the gut or cuts back and hits the home run.  It was our best, most consistent run play last season.
I feel that I have become better at coaching it this off season through research into what others do and reflection in to what worked and didn’t work for us with IZ last year.  I have decided that our entire first week of Spring Ball will be devoted to IZ.  I am getting rid of my 3 day install plan I used a year ago, and the only run play we are going to use for the first 4 days is IZ.  I want to emphasize it’s importance as well as make sure my kids have at least a basic understanding of the play before adding anything.  Much of our offense relies on our ability to run IZ.
There are various styles of IZ, I won’t get in to that now… whatever your style is… if it works for you, keep doing it.  I believe our style works for us so I will keep refining/improving it.
I am writing this article to shed some brief light on some popular concepts and simple tags off of Inside Zone that I think are worth investing in and plan on running this season.
The core concept here is INSIDE ZONE…. for the sake of the drawings I put up the same front so you could see the differences in each.  This is against a 6 man box and using a true “Read” of the Backside DE as the base way of running IZ.
Each formation I have drawn up has the RB on the left and the H back (he is Y in our offense) on the right side.  I teach an outside the tackle alignment so put the DE in more conflict as now he can be blocked both from the inside and the outside. Some teams prefer directly behind OT, or even more inside for a better position to kick out on power… if that is what you do, wonderful… all of these concepts apply to any position you align your H back.
1. Standard IZ Right
The beauty of IZ is that you can run it from any personnel grouping.  It should be the same for the OL whether you are in a 4 wide environment, or begin adding TEs, H backs, Full backs whatever to the formation.  My goal as an OC, but more importantly as the OL coach is to make life easiest on the 5 Offensive Linemen.  I want to reduce how much they have to think at all times.  To keep their rules the same when we add our Y to the formation, likely he brings another defender into the box with him (likely the defender over him when he is spread out in the slot).  Just like he would spread out in Ace, our Y is responsible for blocking that OLB/Overhang.  He will condense some… could play at true LB depth, could walk up on the LOS, could play somewhere in between, either way our Y is responsible for him. This is just our base IZ RT call and if we are having success there is no need to deviate. 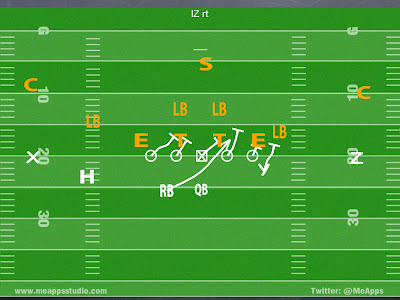 Now if we need to throw something else at the opponent we can begin to use tags to slightly alter the blocking scheme and/or give us a numerical advantage.

2. Slice
I love the idea of the slice tag.  We block IZ RT and rather than read the BSDE we kick him out with the Y. Just like Darin Slack talks about defeating the man advantage in the pass game using routes that cross the center line, I think there is a tremendous advantage in the run game in borrowing blockers from across the center line.  By bringing the Y at the snap on a sharp angle to kick out the DE we set up the potential for a huge cutback lane by the back.  The back must stick with his “chase the center’s butt” read and press the heels of the OL, but he knows when this is called that the cutback has big play potential.  The defense gets almost lulled to sleep by pounding IZ strong over and over, and this cutback catches them off guard. Our best IZ runs last year were on cutbacks and that was without a true kick out on the DE, we only influenced him wide and up field with the QB pull threat. 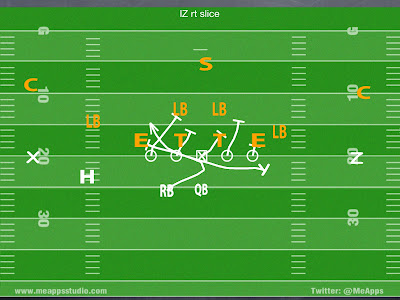 There are 2 ways to teach this kick out block…

Some call the Kick vs the bluff kick and lead backside as 2 separate plays, I like reading it instead to “always be right”.

I am leaning toward the latter for our install purposes simply because the way it should time up… if that Y runs a hard angle for kick out, and the DE goes up field far enough where the Y can not touch him… I do not think that DE can come back and get into the play… no need to waste a potential blocker.  Y should be taught a path to kick out… if he has no opportunity to collision the DE, get square and up the field.

If the LB who condenses with the Y is still playing soft or you feel he is not a threat in the run game (you can bang it up inside or cut back before he can make a play) then I feel that a strong side ISO is an excellent tag.  In this example the RT base blocks the DE out like on IZ.  The Y is responsible for the Play side LB or “first LB in the box”  (we number our LBs when talking run scheme… starting from play side box, working back).

Since Y has the Right ILB… it allows the OL to work their combos not rotating play side to front side backer, but rotating to backside backer… which should allow a longer double IMO. The key to making this strategy work is making sure the OL understands that 1 LB has been taken away so they are working up to LB differently.  The BST can be taught to either use his base zone steps and work with BSG to cut off 3 tech and any backside LB pursuing from outside the box or if you prefer to take the read aspect away from it he can hinge on the DE. 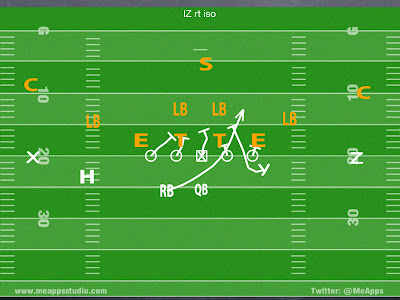 4. IZ Iso Weak
Once the concept of Y being responsible for a backer, and how that effects the OL sinks in, you know have the ability to run Iso week off of zone principles.  You provide a cutback same side play for the Rb (an important key breaker for gun teams who don’t have great run threats at Qb) and again pulling the Y gives the offense an advantage as they can now borrow a blocker from across the center line.

OL blocks IZ Left but leaves the Left Inside LB for Y.  Same rules would apply as strong side ISO for the OL, we are just pulling Y to lead block weak rather than fold him strong.  Again he would be pulling and leading (SQUARE!) up through the A or B gap bubble depending on the front. 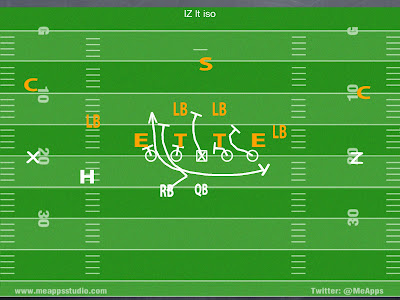 The last play I want to explore in this series is a Bootleg off of the IZ look.  I can not take credit for the details of this concept as I got it directly from Coach Grabowski’s iBook (if you haven’t bought this yet you are hurting yourself, go buy it now).If I had our H WR on the left side I would just run him on a deep out, I just drew it this way to show how the drag should be run, under OLB and over the MLB.

The OL and RB are selling IZ Right.  OL will take their zone steps and if they have color in their gap will base block it but not go more than 2 yards down field, if they do not see color/feel pressure they will get their eyes up and look for work/help.

The OL HAS to block it the exact same as the run play to fool the defense.  Play side SE (X) attacks inside then gets to the corner.  H runs either the deep cross route or deep out depending on if it is too his side or away.  Y in this case would attack the DE (just like in Slice) and chip off into the Flat. 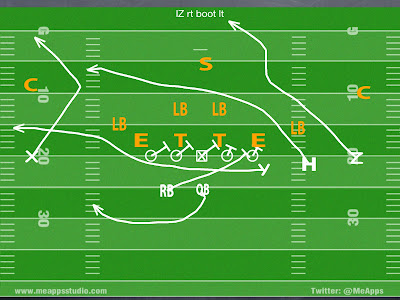 These are just some examples of what I feel are core plays in a spread offense that bases around Inside Zone.  Each of these concepts could very easily be run from Pistol.  Again the alignment of your H back position could be moved to whatever best suits your needs.