The topic of the Sprint Out Passing game came up on coachhuey this week, and with that the idea of running Sprint Draw as the primary constraint play.  We had a lot of success with our sprint draw last season, and didn’t really sprint out all that much.  The sprint out will be a much bigger part of our offense this year and I predict Sprint Draw will be even bigger for us in 2012.

First I will explain the action.  In our sprint out game our QB catches the snap and sprints with depth to the edge, the RB aligns playside and will lead block, helping the tackle seal the edge or pick up any sort of 2 off the edge scenario.  We want the sprint draw to look similar, so our RB will slide 2 steps playside then work back for the mesh.  Qb catches the snap and takes his sprint out, sticking the ball in the RB’s belly on his way by.  Now in the clips you will not see a great slide by the RB’s, and our QB doesn’t sell the sprint far enough or long enough.  We just didn’t emphasize these small details like we should have last year.  Fixing these mistakes will further sell the sprint out look to the defense.

Now to what really matters… the offensive line.

The biggest reason I am so high on sprint draw is the investment I have to put in to it.  There is no new scheme to it.  We block it the exact same way as we would any pass play.  We ID fronts, have a man that we have to block.  We will set, punch, and then drive block the defender whichever way he is going… the biggest thing is to stay engaged.  If say a guard is responsible for blocking Mike in pass protection then he would set, show his hands, and then fire out upfield to that LB.

In the case of a 6 man box, where the RB fits into pass protection we keep all of the rules the same.  Generally our RB has a specific LB depending on how we ID the front.  On draw, he is still responsible for that LB, only know he is responsible for making him miss.  I know it doesn’t guarantee a hat on a hat but it allows us to keep our rules 100% consistent and we get so much LB movement from sprint out that it makes the RB’s assignment of making him miss easier.  Really you want to call sprint draw because that playside LB is over reacting to sprint out to disrupt the sprint out game.  This is where the constraint comes in to play. 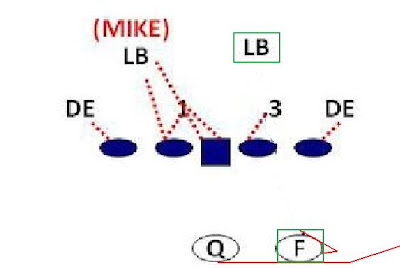 Another interesting wrinkle that I picked up this off season that I can not wait to work on (because our QB is as good a runner as you will see at QB) is QB draw off of sprint action.  It is pretty simple and we could probably run it tomorrow with no work/reps just by telling them the play name.

RB will do his 2 slide steps and now attack the LB he is responsible for.  QB will catch and sprint out for 3 steps, then plant his foot cut back and follow the RB through the hole.  It gives us an additional blocker and should be a very inexpensive, quality constraint to our sprint out game.  Below are a few clips of us running sprint draw last season.  These aren’t the best clips of it last season, just the first ones I was able to locate.  Note the movement even crappy fakes create from the defense in a few of the clips, also notice my OL completely block no one, but we still manage to pick up yards.

The next step would be adding in a throwback jailbreak screen from a sprint look.  It is on the back burner for now as we have a lot we need to improve on, but it is definitely something we will add mid season as one more wrinkle teams have to defend.