I want to share with you all my new toy I have been playing with at practice.  Now when I saw playing with this I mean I have invested zero offensive time in to it.  I have had our scout team O run it and run it very successfully without putting any practice time what so ever in to it.  Every single part of the play is already taught because we use our quick screen terminology.

It is a quick screen to our RB from the backfield which is not uncommon in spread offenses, especially ones that use TFS screen system.  My OL hears the call for quick screen right or left, they do not need to know who is getting the ball, we block our quick screens like OZ.  My thinking is this, if I am calling quick screen it is because I either have  a numbers or leverage advantage I want to exploit now.  I do not release my Ol to lead block on the perimeter on quick screen anymore simply because I have found that I do not need them and instead I would much rather have them seal the box off to cut off pursuit as well as occupy the DE from getting anywhere near a throwing lane.

What is different is that I have changed how we deliver the ball to the RB.  We ran this RB swing screen some the last 2 seasons, and I have used it at my previous school and do you know what all stops had… we fumbled it more times than we caught it and never gained a yard off of it!

I have found that the distance was so short that an overhand throw was tough on the QB to guide in there and if he zipped it, it was almost impossible for the RB to catch.

During spring ball I told our back up QB (scout Qb) to catch the ball, turn to the play and underhand pitch it as far as he could.  I told our RB to open up and run a swing being ready to catch the pitch.  Again my OL required no new teaching whatsoever as they just OZ’d it. 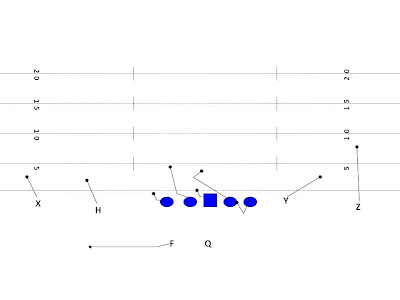 What I love about it is that it gives us a great same side run play.  Often defenses will adjust strength or a better player away from the RB because he usually comes across the Qbs face to get the hand off.
I love that it requires no new teaching whatsoever.
One thing I noticed, it gets to the edge FAST.  It hits outside much faster than our regular OZ, literally if my tackle touches the DE we are already around him.