After a Facebook Shout Out from Julien , I have decided to break down play action pass protections.

I have used each of these 3 pass protections in the past, all with success.  They are probably the 3 simplest/most common play action protections I have seen used.

The first is… our regular standard pass pro.  Many Air Raid offenses call this play as an 80 series play.  So if say 4 verts is 97 in our offense, this would be 87.  The OL bands just say 90, RB just does a little fake dive, QB sticks it out then drops.  This is the simplest form of play action pass protection we can do because there is nothing new for the OL at all. 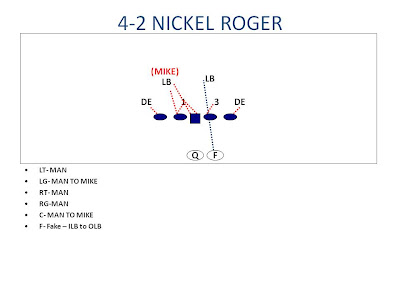 We Stay in our regular BOB Pas Pro Rules
The next 2 pass protections can be used for straight drop back off of play action but I have mostly used them with roll out/boot type play action plays.
SLIDE
The first I will show is a full slide play action pass protection.  This was my main play action protection I used last year because we ran a lot of sprint out, so since we were already good at that, I used the same word on my OL’s wristband to tell them which way to slide and block.  RB just fakes across and picks up on the back side. 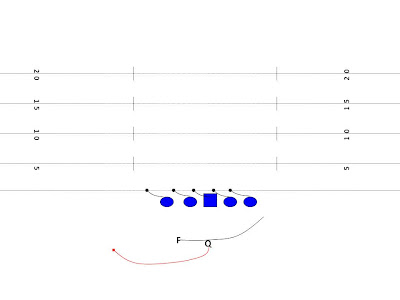 I use an “L” or “R” word to designate to my OL which way we are sliding on their wristband.
RB we use Flame – Fake Left
Fire – Fake Right
BOOT
The final play action protection I will use is a pretty standard “boot” protection.  I have seen countless teams run this from under center, and the rules remain the same in the spread.  I did not use this last year, but this was our only play action protection in the 4 years I coached in an under center Fly/Pro offense.
It works well because it is very similar schematically to a trap play we already ran, they just couldn’t go down field of course.  To the defense keying OL, it must have looked very similar to our base run play. 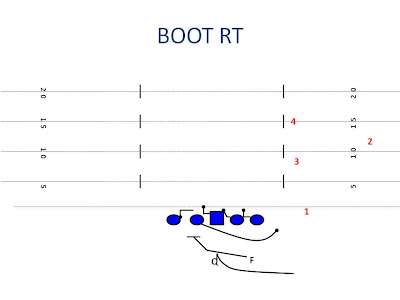 Boot Right:
I would teach this protection as a concept and label it “Boot Rt” or “Boot Lt”