I have recently become enamored by the “Snag” Concept.  Greater detail on the Snag Concept can be found on Brophy’s Blog .

There is both a 2 man and 3 man concept to the Snag play.  I specifically like the 2 man SNAG concept on the backside of our trips and that is what I will discuss in this article.

As I discussed in a recent post I love using trips to put stress on the defense and will attack that 3 WR side until it gets taken away.  It is important to have answer plays that hit on the single WR side to punish the defense for adjusting to your trips by putting 3 defenders out on your 3 WR’s.  Snag is a great play on the back side to take advantage of this.

The Snag concept consists of 2 parts, the “Snag route” by the WR, which is similar to a slant, he is basically trying to run directly behind the next LB and spot up when the LB crosses his face.

The RB runs what I will refer to as a speed swing from the back field.  He takes 3 steps laterally and sprints to the bottom of the numbers, he has to get here as fast as possible to force that weak side Lb to chase him, if he gets to the numbers without the ball he will turn it up the field.

The QB is working that weak side LB and is thinking he will throw the speed swing, unless that WLB sprints and chases it, thus opening the Snag Route right behind him.

This is a great concept against soft 3 and quarters.  It is workable against man to man, but the X must feel the corner trailing him and adjust his route to essentially run into the WLB, giving the RB a pick to get open.

This can be defended by a cover 2 defense in which case I will tell my QB to not work this on the back side. 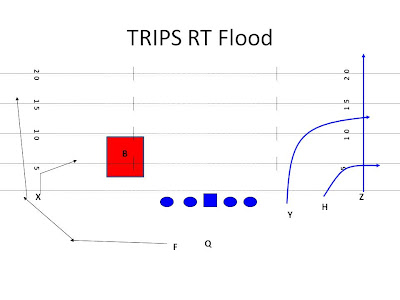 QB can work the flood concept on the trips side, or throw the 2 man Snag back side
Stick 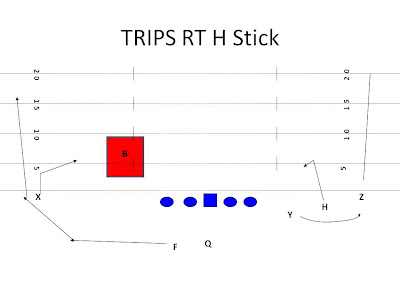 This is my favorite way to run “Stick”. We run a lot of bubble and other screens so that bubble by Y can really open up  on the stick, OLBs will often FLY out to stop the bubble.  2 Man Snag on the back side of course.
Smash I could see this being a great play for us if we invest the time in to it.  We are essentially getting in this play a concept that can beat anything we will see.  The trips side Smash Concept is our answer vs Cover 2, against a cover 3 or quarters defense we can work the back side Snag with ease.  And finally against man to man we can work the Rub on the Snag, or take our shot deep with H being matched up 1 on 1.
My goal with these concepts is to attack that trips side, but always have that SNAG concept on the back side as one of our answers for when the defense commits to taking that away.