Skip to content
Offense Play Action Game
April 25, 2011April 3, 2016 Brett Dudley 0 Comments
I have recently received some private emails asking to discuss play action and goal line passes in the spread, so I decided to offer up my favorite play action pass concept.  I first began running this simple PA concept in a splitback fly/pro style offense.  Our bread and butter was criss cross counter trey and this was our play action off of that look.  We had a ton of success with it, and I wanted to get the same look out of our spread stuff at my new school.  I realized that I could easily do the exact same things out of a 2×2 set as I could out of our splitback set.
From splitbacks we would criss cross the backs, one slipped into the flat, TE ran a deep drag, SE ran a Go (basically just to clear out) and flanker ran a backside post.  These routes are easily converted into our spread stuff, we have merely moved the 2nd RB into the left slot position (H). 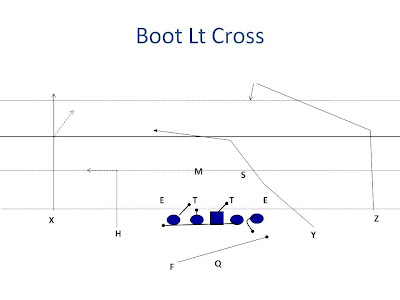 X has a go but if he cant get on top of his defender he will run it at the safety, to take 2 defenders away
H has a 5 yard out
Y has the Deep Cross
Z has a backside post (with the option of curling it up in the MOF if there is grass)

When we ran this under center every single time either the RB was wide open in the flat or the Y was wide open…  It was a great play for us.  I installed it last season with my JV team but didn’t get around to running it much.  Finally called it on a big 3rd down play, and got everything I wanted, deep coverage went deep with the X.  Flat defender jumped the out, so we would have had Y WIDE open on the cross… but he ran straight into one of the officials, fell down and never got back up.  I should have worked on it more so I would have called it more.