“Power” is possibly the most common offensive blocking scheme in football.  It has been used for decades in traditional 2 back, 1 TE sets… your standard “Pro” style play.  Every NFL team runs it.

But I am going to discuss the flexibility in using the “Power” Blocking scheme for multiple looks for a Spread Offense.

By “Power”  I mean, playside blocking down, backside Guard pulling for front side LB, backside tackle hinging, and the defensive end is usually kicked out by the FB.

I am going to explore 3 different ways you can utilize the Power scheme with your OL.

I do not care about the skill guys, I think their jobs are much easier, it all comes down to what your OL can do.  If I can run 3 completely different looking plays, all using the exact same thing for my OL then it is perfect because it increases the efficiency of the time I have with my OL.  I have increased the number of different plays I can run, but I haven’t increased what my OL have to know or be able to do.  We can get a ton of reps at the Power scheme. I want as few schemes as possible up front, so to have 1 scheme, that does 3 different plays is huge.

Now I do not know if I will be running these plays this year, I just want to explore the flexibility of the Power scheme.

First… Your basic Power play out of the spread.

This can be done in single back, or out of 2 back gun sets.

IN single back, it becomes an automatic Q Power run, if in 2 back it can be to the other RB.

Either way you get your playside RB kicking out the DE
Playside OL blocking down (or double teaming to backside backer), BSG pulling around to PSLB

Pretty simple play, but what I love about it, is that out of 1 back, your are overloading the defense to the playside.  QB Power overloads the defense, if they cover up all your WRs and keep a deep safety. You get a hat on a hat and everyone has a good angle. 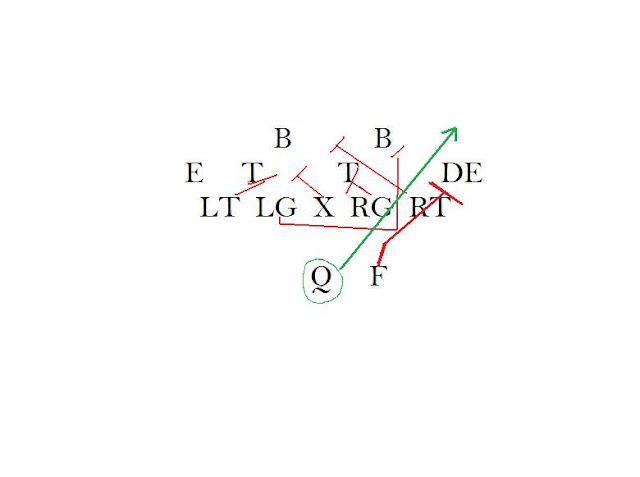 Tog from Coachhuey has been using this Flash concept with veer blocking for a few seasons now, but I like it with Power blocking, solely because its nothing new I have to teach.  We do not run veer, but we will install Power every year, therefore there is nothing new to teach, my OL never need to see or hear the word Flash, their wristbands would only say Power Rt/Lt. 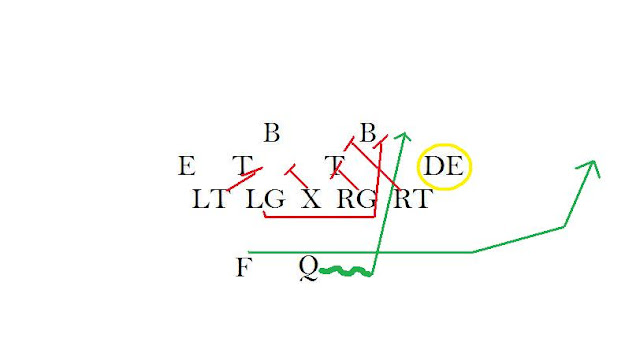 Flash is an inverted veer play.  The OL of course block power… you will see in this play there is no one to kick out the DE… instead the QB must read him.  This is one of the staples of Auburn’s offensive attack with Cam Newton this year.  They use their speedy backs for the edge threat and try to pound newton inside on this.

Basically the QB is reading the DE.  If he crashes down with the tackles down block, then the QB gives the ball to the RB.

*The RB must run a wide path so that the DE can not close down, then pursue him and make the play, when repping this in practice you have to set up a path of cones that the RB must run around every time so he gets used to the path he must take.

If the DE widens for the sweep then QB pulls it and gets up inside now.  He should be right on that pulling guards butt if he keeps the ball.

One thing I have seen that I love on this play is having the QB shuffle towards the DE on the mesh.

When watching Auburn run it, I think to myself I love it, but I am a little worried about a quicker DE who can widen at first, slow playing the QB, then crash back down as soon as QB pulls it.
I believe I found the answer.  I was watching the Arizona HS state championship online a few weeks ago and i saw a team, Saguaro HS using the flash concept.  What they did that I loved was as soon as their QB caught the ball, he took 2 shuffle steps to the playside, this gave him longer to read the DE, and once he did decide to pull the ball he could get straight down hill.  Those 2 shuffles slow the mesh up just enough to force that DE to make a decision. 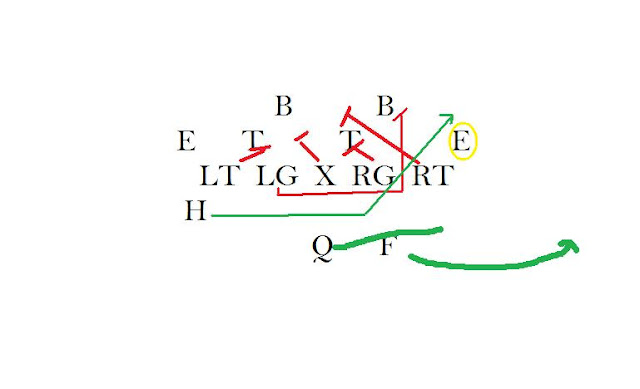 Power Scheme up front of course.

Q and F are running speed option off of the force player.

The H back is coming underneath for the shovel pass.

This is a triple option play.

If the DE widens, Qb will glide outside then shovel underneath DE.  H catches the shovel and turns up inside behind pulling guard.

If the DE crashes down then the QB keeps the ball, running outside and then will attack the pitch man OLB/SS and either keep or pitch to the F

When you consider that flash is a double option it is really like 2 plays. Crazy Option is a triple option play so it is like 3 plays in it self.  Plus the fact that you can run a standard Power out of 1 or 2 back gun sets (making it 2 different looking plays itself)

This is truly a very simple, flexible scheme that really has some bang for its buck.