I was asked to do a post on the DRAW play by a member on coachhuey, so I will explain exactly how I teach my draw blocking.

I want to first state that up until this season I HATED draw… I know every coach says “you gotta have a draw”… But to me draw can be an unsafe play the way most do it, I often see OL so anxious to get up to LBs that coaches actually teach them to not block the DL… Expecting them to run right past the RB… I’ve never understood that one.

I’ve noticed one thing about draw from watching football my entire life… Do You know when draw gets you a good gain?

Also I don’t want to teach anything new, I try to be a minimalist with my OL… Now, rant aside… I’ll explain the idea I had this season, I told our OC that this was the only way I was willing to put draw in the play book.

To understand our draw you must first look at our pass protection. The beauty in the way I do draw is that I have nothing new schematically to teach… We will block draw exactly how we would pass pro the given front…makes it simple and to the defense everything looks just like every other pass attempt.

Next, we must understand that I want a hat on a hat. Against a 5 man box it is easy, my 5 have their 5, against a 6 man box I’d prefer to run QB draw because we get a hat on a hat that way. 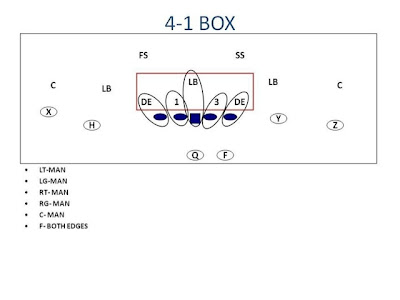 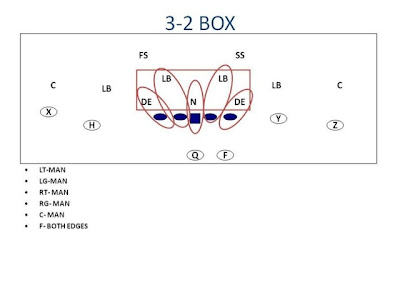 Against a 5 man box, each OL is assigned a defender, we set as in every other pass, then we punch and drive block the defender… Take him where he wants to go, the most Important thing is to stay engaged. Against a 4 man front I give my center and guard the privilege of setting and then folding a 1 tech… No matter what they know how to block the front. If I really wanted to I could call QB draw and RB would end up doubling on one of the ILBs.

Next we move to a 6 man box, the important thing to notice is that now the back is responsible for an ILB in the protection scheme. 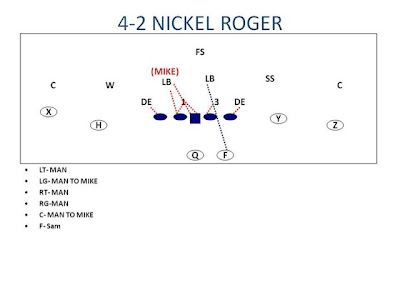 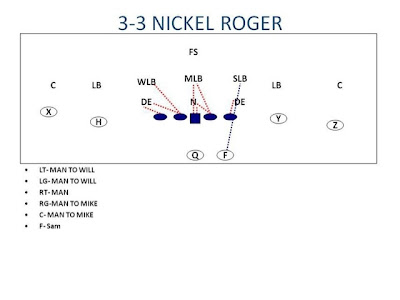 The RB has the LB to his side, and that who he is responsible for on draw, if we ran QB draw he would hop hop then attack him. If we ran a RB draw he is 1 on 1 with him and we tell him he has to win that battle.

IMO the best way to run RB draw into a 6 man box is off of a sprint out look. We had a lot of success with it this year and it sets up nicely because we run a good amount of sprint out. OL blocks it the same way… They know their fronts and they know what draw means to them. I’ve found that the sprint out action really messes with the LBs and they over flow, giving that RB more space to work with when he is 1 on 1 with that LB. We had a lot of big plays on this, puts that play side backer in a bind… “Do I work laterally with sprinting out QB or do I sit here for the Draw?”… Either way when he guesses wrong it’s going to be a big play for us.

The sprint Draw ends up being similar to the “Ole Wing T Sally” play.

Utilizing this way of teaching draw my feelings about the play have completely changed… I know it will be a solid part of our offense next year.  This is a high MPG (yes miles per gallon) play IMO, we don’t have to invest much time in it compared to the mileage we get out of it.