I think being in spread puts more emphasis on thinning out the defense, making them defend the entire field and utilizing numbers and leverage to move the ball, but one can still use a series based approach to play the if/then game when a defender or defenders begin to “cheat” their responsibilities in order to make a stop.  Offense is all about putting defenders in conflict.

I started drawing up this little series of plays when this season ended.  I looked at how I used to do things out of 2 back under center, and the play action game we had a lot of success with.  I am normally a fan of staying as maximally spread out as possible, for example this past season 100% of our snaps were from 10 or empty personnel… no TE EVER, no 2 Back EVER.  The majority of the season we had a QB who wasn’t necessarily a great runner, looking back I think the added back or TE could have helped us since our QB didn’t really read BSDE and we didn’t run him very often.  Next year we have 2 QBs who can fly and will be more than capable of reading BSDE and designed QB runs.  However I have set up this little package as something that can be used without a running QB, year in, year out, regardless of talent.  Now if you get a kid who can run it and throw it, then it just opens up the options you have even more.

I base this series out of an Off-Set I look, just in the gun.  Y by our base alignment is our slot WR, he can be moved to either right or left side, or with the use of a “YO” tag he can come down to a TE position if we feel that will help us.  For this article’s sake , all of the drawings are with Y as a slot and H in the offset “full back” position.  Our “H” is our slot WR as well when we are in 1 back, this is a good fit for that “tweener” type of kid.

QB is at 4.5 yards, RB at 6, H even with the QB and aligned over B gap… might play with these alignments, but this is what I have seen a lot of teams do.
Every play in this 4 play series begins with the QB catching the snap and opening to the Left (counter clockwise) and with the RB stepping to the left of the QB.  That is what sets up the series based approach, the fact that the initial movement of the QB and F look the same on every play
1. Power

Standard Power G scheme to the Left.  Playside OL will down block or double to backside LB. FB kicks out DE, BSG skip pulls to playside ILB.  BST hinge blocks BSDE.  QB can sell dropback or boot action after he hands off to F.  If, let’s say, the defense aligns in 2 high look (4-3) then I would have the playside down/double to MLB, and BSG would skip pull to the LOLB.
Schematically, if my H can get a semi decent kickout block I should be OK, my playside OL has good angles and we account for every hat with the exception of the LOLB in the above look.  Now his alignment can vary depending on how the defense wishes to play it, but they have to give something up.  He may stay with a wide alignment to help that corner with our X WR underneath.  If talent is equal, I think my guys should be able to win those battles up front and we will get 4-5 yards a pop on POWER.  The only one who can really stop it is the LOLB.
That is the next part in the series, taking advantage of that LOLB when he wants to make the tackle on power. We can run a play action pass in to that LOLB and catch him cheating
#2 Flood Left

If we slide pass pro the OL right, it looks just like the playside down blocks on Power.  H will attack DE and chip him as he slips into the flat. F fakes Power Left and runs right at that playside DE. (I could also have my OL just block man on if I was worried about the RB on the DE ) X Clears out, Y runs the deep crossing route, Z runs a backside post and we end up in a pretty standard Flood Concept to the playside.
I would probably semi roll the QB to it after he fakes, most times he will be able to hit the H in the flats right now, if the LOLB does recognize it as a pass and chases the H, the Y will likely come open when he gets all the way across.  I can also help my Y by using the YO tag which will bring him in so he doesn’t have as far to run to get across.
Now let’s say the inside LBs are really flowing hard to blow up Power, or we get secondary rotation to where our QB is opening we can hit them with Counter back to the strong side.
#3 Counter
coachhuey knows how much I love the counter scheme.  Doing it from this set allows us to block the backside DE, and by removing Y from the box we can remove a LB.

QB still opens up to the left, F steps Left like he is getting power, then plants and gets the hand off over the top of the QB to run counter Right.
Standard Counter Scheme up front, playside OL blocking down/doubling to backside LB, Center blocking back, BSG pull and Kick, BST pull up to LB.
Inserting H allows us to block the backside DE.
Now depending on the type of kid I had at Y, I could bring him down to a TE position, to widen the playside DE, he would down block on the PSILB, and the tackle would pull to that OLB who would likely condense with the Y condensing in YO.  Just depends on the kid I have there, how I would handle it.
Lastly when teams begin to jump the counter, we can hit them with another play action flood concept.
#4 Flood Right

Same concept that we had to the left.  Ol can man protect or slide it. H can chip DE on his way out to help the protection, F sells counter. QB can half roll to it if that makes it easier and we get our standard flood to the playside.  Again, I can mix in the YO tag if I want.
These 4 plays(really only 3) are simple, effective and can yield a lot of mileage.  They are good under center and in the gun.  I could easily seeing us install this package, plus 4 verts and do nothing but work that for the first week of spring ball.
Looking Beyond these 4 plays
While I think this is a pretty good start to an offense, I do not think that it is enough by itself to beat a good team.  These are some ideas I have just glancing at the formation.
Screen Game, all of our screen game exists still, really with little to no changes.  We can fake run and throw screen to either direction, this would especially be good if we get soft corner over X and the OLB wants to crowd into the box to play run.
We can use an OZ scheme and run stretch, or just pitch the ball to F going to the H side (Left in the above diagrams). H would lead block on the OLB, OL just uses OZ to seal the edge.
I have seen teams run sweep (OZ) with H going to the right, and having F lead block around he edge for him… one could use this or the inverted veer Dash concept with H has the one getting the ball.  F would lead block to the Right in either case, H would come across the QB as he is reading the Right DE, OL uses the Power G scheme that they already have a ton of reps in because Power G was the first play installed in the series.
We are already in a 7 man protection, we could run the outside WRs on anything we want deep to exploit a 1 on 1 match up with the corner and we can use Y to control the middle with a search route.
I can go ISO either way very easily.
If I wanted to get into a triple option look, I can use H as the dive on veer, or have him run zone and read BSDE… with F stepping around running pitch relation.  I could run a loaded speed option quite easily.
I could easily get in to the air raid staples of mesh, shallow, stick etc. (they started from 2 back offense anyway)
Heck I’d still probably be able to get H up the Hash and run 4 verts from this set.
These are just some examples of simple things that could be done from this formation beyond the 4 play series I started with.  If I wanted to include more QB runs because he was a kid I wanted to feed there are a number of ways I can do so.  Naked QB runs after fakes to F, I can run follow plays with the QB to really try to overload a defense by having H and F lead block for QB.
Again I can use the option plays mentioned above (dash,veer,zone triple,speed option)
Now of course everything I mentioned would probably be TOO MUCH offense to ever get really good at something, but a few of those ideas can be picked out, added to the 4 play series I started with and then you have an entire offense that can stretch the field in any direction as well as put defenders in conflict.
One other benefit is in short yardage or goal line…Many people feel spread can not work in short yardage situations… I do not agree with this, but say for some reason (weather, injury to Center) I did not want to be in the gun, I could pretty easily go under center and run this series pretty much the same way, I would just need a little bit of work with the QB on the footwork, because in Gun he just catches and turns.
Being an OC in HS is all about putting the 17 year old kids on defense in conflict, so much internal conflict and sadness that after the game they turn Emo… 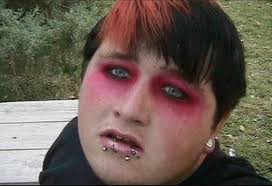