I want to thank every one’s favorite French coach, Julien for suggesting the topic of this post… Counter from the spread, or as some other spread coaches refer to it, GT.

This is my favorite play in football, not just from spread, I made a living off of it when I coached in the fly and when I coached in a more pro style 21 personnel offense.  I just live the scheme, its simplicity, and to me it has an answer for every defense.

The scheme itself is quite simple: 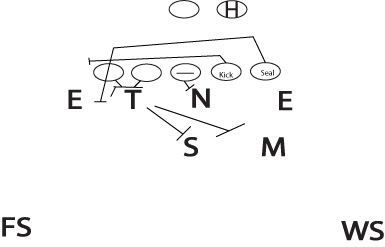 Play side: we block down or double to backside backer… we always leave PSDE and PSLB alone (unless they cross face

Nothing magical about it, and I am sure we have all seen it or run it in our careers.

Went from a zone based team in 2010 to a gap based run team this year and it worked much better for us. We rushed for 1700 yards with 100% of our snaps being from 10 personnel or empty.  Not bad IMO for a team that passed as much as we did.  Counter was a staple of our run game throughout the season… I must admit that as the season went on teams got better at stopping it… that is what I want to focus on now… the little things we did wrong, that I have learned from, that we can correct to run the hell out of Counter next season.

I want to first clarify that we had 3 variations of counter this season… regular counter (read on BSDE by QB), CAT (front side counter, RB aligned on same side as counter , took a few steps then cut back following tackle), and Q Counter (RB fakes across, blocks BSDE and Q keeps it).

Our first problem came from backside Ends… it was a problem that should have an easy answer… the whole point of running this from spread is the read on the backside End…I do not know what happened to us this season but for whatever reason this was never stressed enough.  We had 2 QBs, a pocket passer, and a wildcat type kid as a change of pace… the passer wasnt a great run threat but we never repped the read aspect enough so DEs would chase without fear of consequence… when teams could catch us from backside it really took away our ability to call this play.

We tried putting some band aids over this by bringing a slot WR split down to a wing like position in order to step across and seal off the DE from chasing tackle… but our WRs never understood how to do this properly so it was pretty much a waste.

Q counter was the “safest” way to call counter because our RB could account for BSDE… with the wildcat kid in this was a great play for us this season and even the pocket pass had a couple big first down runs for us on it this season, the highlight of which came when he just about piggybacked our pulling tackle into the end zone to ice a big comeback win for us mid season.

So my 2012 answer for this problem is

Our next issue was the PSDE, as we went along this season we faced 2 problems from DEs
One team wrong armed us… My OL had the right response, guard logged it, tackle saw it and bounced it naturally, our problem was our RB didn’t see it and wouldn’t bounce it outside… the coaching staff took the blame on this one, our guys up in the press box couldn’t see this was happening so we abandoned counter but really the issue was us not telling the back to run it wide like sweep… looking back on film there were 3 times the RB ran wide and it was a 10+ yard gainer each time.  Looking back I do not know how we missed that one.
Problem #2, The teams that stuffed us had physical specimens at DE and were able to read our down block and crash down so hard down the LOS that they laid the hammer on our guards… we never got a good kick out.
My answer for this next year is the DART play…  We did a good job of 1 on 1 blocking these same DEs when we ran dive and sweep… instead of trying to kick him, I want to base him with our PST, have everyone but the BST base block, and then have BST pull and lead up on the PSLB… instead of trying to dig him out with the guard, the PST has an easier assignment riding the DE out
That play, mixed with our counter scheme, mixed with our sweep(OZ) scheme… puts a lot on that DEs plate… add in the fact that we can option him by running inverted veer and he doesn’t know what to do on the snap.
Although we ran less counter in the 2nd half of the season because of the above issues, I think it will be the core of our offense in 2012.  The speed bumps we faced this season only helped me to learn more about the scheme and how to adjust it in order to make it work.