This Post is in response to the question posed by ABC…
In regards to an article by Steve Axman on how Coverage and front’s must relate to each other to be sound.

I am going to simply talk about coverages with a 4 man rush, for simplicity sake, I will leave zone blitzes out of this post.

In the article by Axman he discusses everything out of a 3-4/5-2 defense… I feel pretty comfortable explaining this further because I have even though I have worked with multiple D Coordinators int he 5 years I have been coaching, they have all been 3-4/5-2 coaches.  This whole post will be based on a 3-4 defense but the principles behind it apply, or at least should apply to any scheme.

In a 3 man front (whether 3-4 or 3-5)  the down 3 are rushing and 1 more player will be coming on most snaps giving a 4 man rush.  So after the snap it will either look the same or very similar to a 4 man front but the 4th rusher can change depending on coverage.

When creating a defensive scheme, one must first start with the coverage they want to run.  This coverage will then determine what front they can get into and which players are available to rush the quarterback.
It is important to see how the coverage you play correlates with the secondary’s run fits within your scheme.  Players need to understand what it means to be a force player, or an alley player, and where they need to be on certain run plays.

COVER 3
I will start by explaining, in my area, the most common coverage around, your standard Cover 3 Defense (Axman also refers to it as Sky in his article)

I will explain things first against a basic pro style formation, just for simplicity sake.

So we will begin with the deep 3. Corner, FS, Corner

They of course split the field into 1/3s, do not get beat deep!
Typical alignment is for corners to be 7+ yards deep at the snap and staying in their deep 1/3. On a run play they are secondary run support, they should keep all run plays inside of them and just make a sure tackle.  In cover 3, when they are making tackles it is preventing the big plays.
Free Safety should align to the middle of the formation, keying the strong side #2 for his run/pass read.  He has deep middle on pass.  on a run he is the alley player.

In Cover 3 the Strong Safety is in a rolled up position, to the strong side.  He has the flats or curl/flats, on pass.  He is the force player on outside runs.  He is to force all outside plays back inside of him.

Now that we have seen what the DBs are doing, I will illustrate how this coverage dictates the front that we should run. 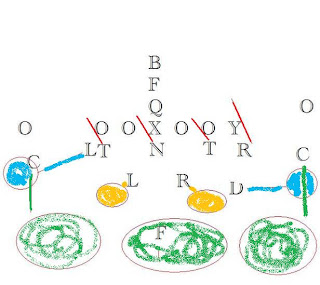 Some clarifications of my drawing, I used this in a PPT playbook I made up for my self when I took a DC job a year ago.
D = SS
ILBs = L and R
OLBs = also L and R
I will differentiate by writing LILB or LOLB etc.

This becomes the responsibility of the LOLB.  His job is just like the SS, curl/flat zone and force player on run plays.

Because he will be vacating, we need a edge rusher/contain man to that weakside.
So the natural/simplest answer is to slant the Down 3 DL to the weakside.
By Slanting weak (as shown) we get a contain rusher on the weakside and account 1 player per gap.  Defense is all about gap integrity and support.

The 2 ILBs have the hook zones on pass coverage.

Now that we have accounted for 3 deep zones, and 4 underneath zones, we have 1 left over defender, our ROLB or the strong side OLB.  He is not needed in pass coverage so we can bring him off the edge to the strong side ( or bring him across the TEs face)

Against a spread look I would adjust like this 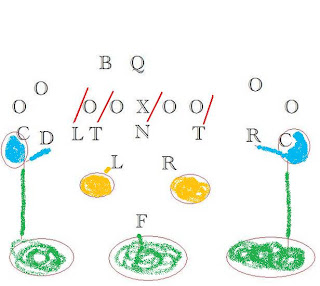 Now we are in a spread look. I would call this strong Left because the Back is also to the Left.
This puts our SS (D) to the left side.  Everyone elses job remains the same.  We slant to the weak side (right) to get an edge rusher/contain man to the weakside.
The only actual difference is now that there is twins to the RT side, our ROLB must remove himself from the box, at least splitting the difference in order to cover up the #2 WR and effectively cover his curl/flat zone. My base rule in this defense is for the Weak OLB (ROLB in this case) to split the difference when he has 2 WRs to his side.
Just a very small change, every one’s job remains the same.
The coverage (3) dictates which way to slant our DL, and which of the 2 OLBs will be rushing.

Cover 2
Now I will Explore Cover 2

We will start with the Safeties, positioned on each hash.  They have Deep half and are the alley player on runs.

The Corners are up jamming #1 WR, funneling him inside to the Safeties.  They have Flats on Pass, and now they are the Force players on outside runs.  They must force all run plays back inside. 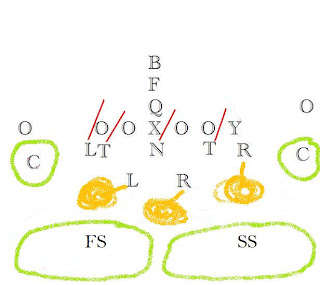 We will drop the Strong side OLB (ROLB) into the hook/curl zone on pass.

The SILB(RILB) drops into the middle zone.

Dropping the Strong Side OLB (ROLB) means we need a edge rusher/contain man to that side, so we will Slant our DL to the STRONG SIDE in Cover 2

Since all pass zones are accounted for, we are able to bring the WOLB (LOLB) off the edge, giving us our 4th rusher.

Again, the coverage dictated our front and run support.  Playing Cover 2, forces us to slant Strong.

Now I must add that playing man Coverage does allow you to bring a 5th rusher, however you lose a lot of your run support because now your DBs are locked man to man, so they can not have their eyes in the backfield providing your run support. 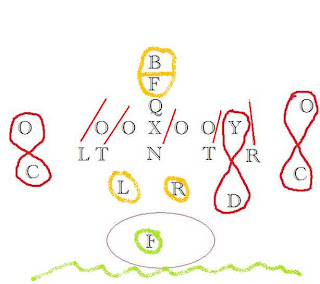 Corners have #1 WR man to man
FS plays Center field, he is the only DB who can have his eyes on the play and he is still able to run the alley.  His job in Cover 1, is to save touchdowns.

the SS has the TE man to man.  His alignment can be played with depending on his skills and the TE he is up against.  Some guys want to be in his face pressing, others do better playing off.

Both ILBs are responsible for the RBs out of the backfield.

that is it for pass responsibility, and we are still left with both OLBs, so they become our rushers.  Now that we have 5 rusher we can do multiple things up front.  We can slant strong and bring 2 off the strong side edge.  We can pinch our DTs and bring OLBs off the edge, really just about any thing will be ok here as far as a twist or stunt, as long as we have someone assigned to every gap.  In the diagram I have the DL slanting Strong so we can have a defender in every single gap and bring 2 off the strong side if the TE releases.

Again the draw back of playing Man is that you lose out on those DBs with vision on the play, and therefore lose your secondary run support.  You risk getting beat deep.  That said in the past we have often have better athletes than our opponents so we have played a lot of man to man, figuring we will get to the Qb by bringing the extra man, before we will get beat in coverage.  This has worked well for us a good deal of the time, but we have been burned in it occasionally.

Coach ABC,
I hope this has helped to clarify the idea of how your coverage will determine what you are doing with your front and how they tie into one another.