I do not know if a combination of routes and reads can necessarily be defined as “for spread teams” or “for pro style teams”… to me they are just moving players and manipulating the defense.  But I decided to take some plays that are widely viewed as “spread” plays and break them down from an under center 21 personnel offense.  I drew up split backs because the RBs are balanced and I have some experience in a pro style splitback offense.  However these concepts could just as easily be used from any other 2 back formation… I do think it is easier for a FB to release if he is offset those extra couple yards than compared to being straight behind the QB.

Each of these plays is a part of most spread passing arsenals… they are the most popular plays I see being talked about by spread people.

I think each of them would work just as well in a 21 set and could be done off of straight drop or play action.

I am by no means an R4 expert but I will do my best to put the concepts into it’s terms.

1. Snag
Seriously, did you guys think I would write about anything else before bringing up Snag?  If you have followed my activity recently you have probably seen how enamored I am with the 3 man snag concepts and variable tags on the backside.  I just think it is a money concept.  In my mind it is just as potent in a pro set.
TE has the Corner route, this is our Rhythm.  The snag by Z is the Read.  The playside RB has a swing (or shoot) route to provide the Rush horizontal stretch on the #2 defender.  X route on the backside can be a quick slant or snag route as a base.  I have it drawn with a Dig tag to exploit middle LBs who want to cheat to the 3 man side.  The backside RB can be left in for protection or run a swing to the backside for a 2 man snag combination. 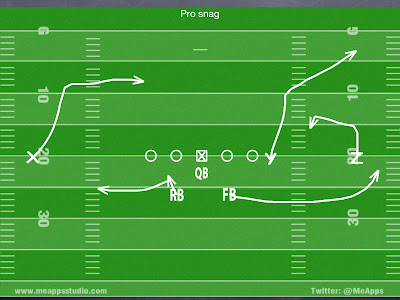 2.  A similar 3 man triangle concept… Stick!
This concept is essentially the same as Snag as it has the same reads for the QB, and attacks the same grass, it merely inverses who the deep route and the settle routes are and is a great way of getting the ball to the TE (or slot depending on formation) the ball quickly. Z has an outside release GO and is our Rhythm.  Y has the Stick and is our Read.  The Rb is again the Rush route on a flat/shoot/swing whichever you prefer for a horizontal stretch.  I have X drawn up on a slant for  the possibility of working that 1 on 1 matchup should you desire. 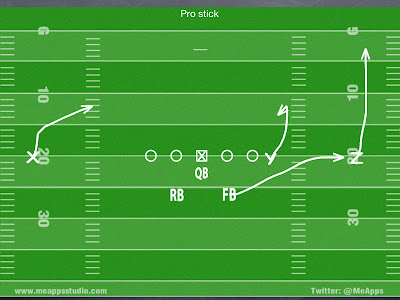 3. Spacing is a very popular quick game concept with many coaches.  There is no vertical stretch but we are able to put a lot of pressure on the defense to cover horizontally.  Y is our Rhythm and has the Spot/mini curl, Z is the Read with the Snag route (carry over teaching from Snag Concept) and again our RB provides the Rush with his flat/shoot/swing.  I drew it with the same X slant as above to work 1 on 1. 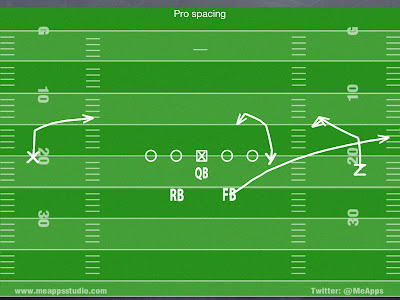 4.  Now on to a vertical stretch.  I love the horizontal stretches given by the plays above but a vertical stretch play is a necessity in my opinion.  The simple flood concept is easy out of a Pro Set.  This was our best concept when I was at my first coaching stop.  Z has a skinny post, I used to run this as a GO but I like the idea of running a Skinny post instead to occupy a safety lined up on the hash… keep him out of the picture of that out route. That skinny post is our Rhythm.  Y has a 12 yard out and is our Read.  RB is the Rush with another flat route.  Works great off of a play action half roll action with that RB setting up faking a lead block then leaking out.  Key is to work the timing in practice and keeping proper spacing between Y and the RB.  There needs to be vertical spacing (Y at 12, RB on an angle to 3 yards at the sideline) and Horizontal distance between them to increase the chances of hitting one of them.  Backside can run a post or dig route that we can capitalize on later in the game when we see an over reaction. 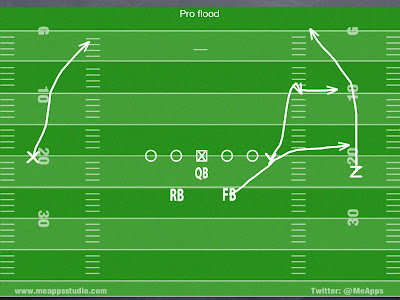 5.  Finally I want to touch on 4 verts.  So far everything I have drawn has involved the RB releasing on some sort of flat route from the backfield.  Verts is a great play that not many 2 back teams run, or can only run from one of their 1 back sets and somewhat give it away.  I think it is reasonable to be able to run it from a 2 back set with the right field spacing.  X and Z own the numbers.  Y has the right hash.. and ideally we run this play from the left hash or close to it so the RB can start his flat route and turn it up the hash… this route is very difficult to cover from a defense’s perspective.  It should fit in with our timing because the Y is our rhythm and always our first read… We want to zip that ball in to him as soon as he clears the OLB every time… then if we see that taken away by collision or FS jumping it we move to our Read… the left hash vertical (Rb from backfield). The Rush is the backside RB checking down.  Coaches can use tags to work reading an outside vert first if that is the match up you prefer. 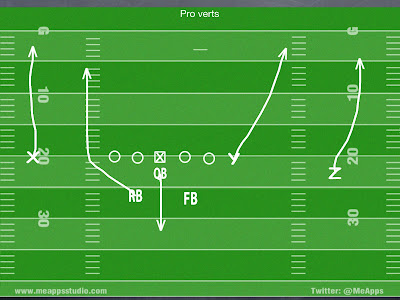 My final note is that on any of these concepts with the Rb getting out… We can always tag “Wheel” to convert his route into a flat then up the sideline… this is a nice constraint off of his usual flat route and can hurt the defense that wants to jump his flat route.  Make sure any other deep route to that side is converted to a Post or Dig on this play so we don’t have 2 men running their routes into one another.  For example if we worked that 3 man snag with a “wheel” tag… Y would run a Dig… because a corner would put him and the RB (wheel) into each other’s way deep down the sideline.