Now that I have explained my new set of screen rules in a previous article I want to touch on how I run a RB screen using the same OL rules as I use in our WR screen game.

Quick refresher… PST has the unblocked Alley player, PSG has 1st LB in box, C has 2nd LB in the box.

First I believe in doing the RB slip screen as a double screen.  I think at some point in all of our coaching careers we have called a RB screen only to see the DE read it and sit right in the QBs window, or you have that fat DL who just didn’t rush that play and is now right on top of the RB ready to kill him.  Well I got tired of seeing this so i believe in running all RB screens as a double screen.  RB slip screen to one side, with a WR built in on the backside that the QB can throw if he has any doubt or cloudiness with the RB screen.

We installed this last year and I really liked that we always had an answer, it was automatic for the QB, drop and throw to F if he is open, if you don’t like the throw, plant and throw jailbreak backside.  Clear = F screen, Cloudy = Jailbreak 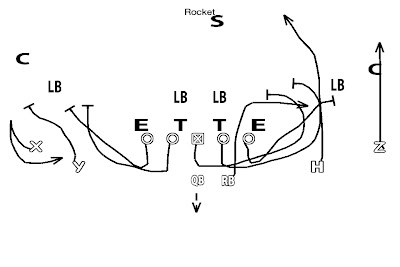